Greenberg Called Out for Climate Hypocrisy

“At every turn, Evan Greenberg has chosen short-term profit over people and the planet. Greenberg can decide today that Chubb isn’t going to insure any new fossil fuel projects, and if he cares about preventing climate catastrophe, that’s exactly what he must do,” said Cherie Acierno of Rise and Resist.

Chubb, which sponsors the US Tennis Open, has come under intense criticism for continuing to insure fossil fuels in spite of Greenberg’s public rhetoric on the urgency of addressing climate change and the threat it poses to the insurance industry. Citizens’ groups–including Rise and Resist and New York Communities for Change–called out Greenberg for his climate hypocrisy.

“Evan Greenberg should stop torching the planet. It’s the definition of hypocrisy to claim you care about climate change and then turn around and insure the coal mines and oil pipelines that are driving the crisis,” said Pete Sikora, Climate & Inequality Campaigns Director for New York Communities for Change.

Chubb is one of the top-ten insurers of oil and gas in the world, and insures the climate-wrecking Trans Mountain pipeline over the objections of Indigenous leaders in Canada. At a week of action in June, protests at Chubb headquarters across the world called on Greenberg to drop the pipeline. He refused to even meet with Indigenous leaders.

“The Trans Mountain pipeline is nothing short of a threat to all people in our territory and beyond. There are 84 spills to date and the certainty of many more if the expansion pipeline is built”, said Kayah George, Divestment Campaign Liaison at Indigenous Climate Action. “By insuring this pipeline, Chubb enables the violation of our rights, the theft of our lands, and the destruction of our most sacred water, the Burrard inlet. We call on Evan Greenberg to publicly drop the existing pipeline now and to commit never to insure the expansion.”

This followed a March 2021 letter from Senators Sheldon Whitehouse (D-RI), Jeff Merkley (D-OR), Elizabeth Warren (D-MA), and Chris Van Hollen (D-MD) to Greenberg asking how Chubb’s underwriting and investment policies align with its sustainability commitments. Greenberg has refused to meet with them as well.

In May, protestors at Chubb’s headquarters donned Evan Greenberg masks and demanded he act on climate. They delivered a letter from 70 environmental and Indigenous groups to Greenberg asking him to stop insuring new oil and gas projects.

Greenberg has not even ruled out new coal mines, such as the Adani Group’s Carmichael mine in Australia, which at least 35 insurers have said they will not insure. While Chubb is one of the 30 global insurance companies who have adopted a coal policy, its policy is significantly weaker than those of European counterparts.

Chubb’s policy restricts insurance for companies that derive more than 30% of their revenue from thermal coal mining or utilities that generate more than 30% of their energy from coal, leaving the door open to insure massive, diversified coal companies. Greenberg has refused to tighten the policy or take any further action to restrict Chubb’s support for fossil fuels.

Greenberg is unique among US insurance company CEOs for his outspoken stance on climate change. He said that Chubb’s 2019 coal policy reflected “Chubb’s commitment to do our part as a steward of the Earth.” As early as 2006 he stated that “no greater problem confronts mankind than global warming.”

Citizens groups noted that exiting fossil fuels isn’t just good for the planet; it’s also good for the bottom line. French investment bank Societe Generale found that exiting coal could add billions to insurers’ valuations, and that exiting oil and gas should be the next step. Bloomberg reported that premiums from insuring new oil and gas projects amounted to just .1% of all property and casualty premiums in 2018.

Insurers also have a vested interest in a stable climate: climate-driven disasters cost the industry $82 billion in 2020, with all models indicating that this number will only grow as climate change worsens. The International Energy Agency recently concluded that there is no room for any new coal, oil, or gas in a net-zero by 2050 pathway.

Insure Our Future in the U.S. is a campaign comprising environmental, consumer protection, and grassroots organizations holding the U.S. insurance industry accountable for its role in the climate crisis. It is part of the global Insure Our Future campaign, which promotes a rapid shift of the insurance industry away from supporting and financing fossil fuels and towards accelerating the transition to a clean energy economy. 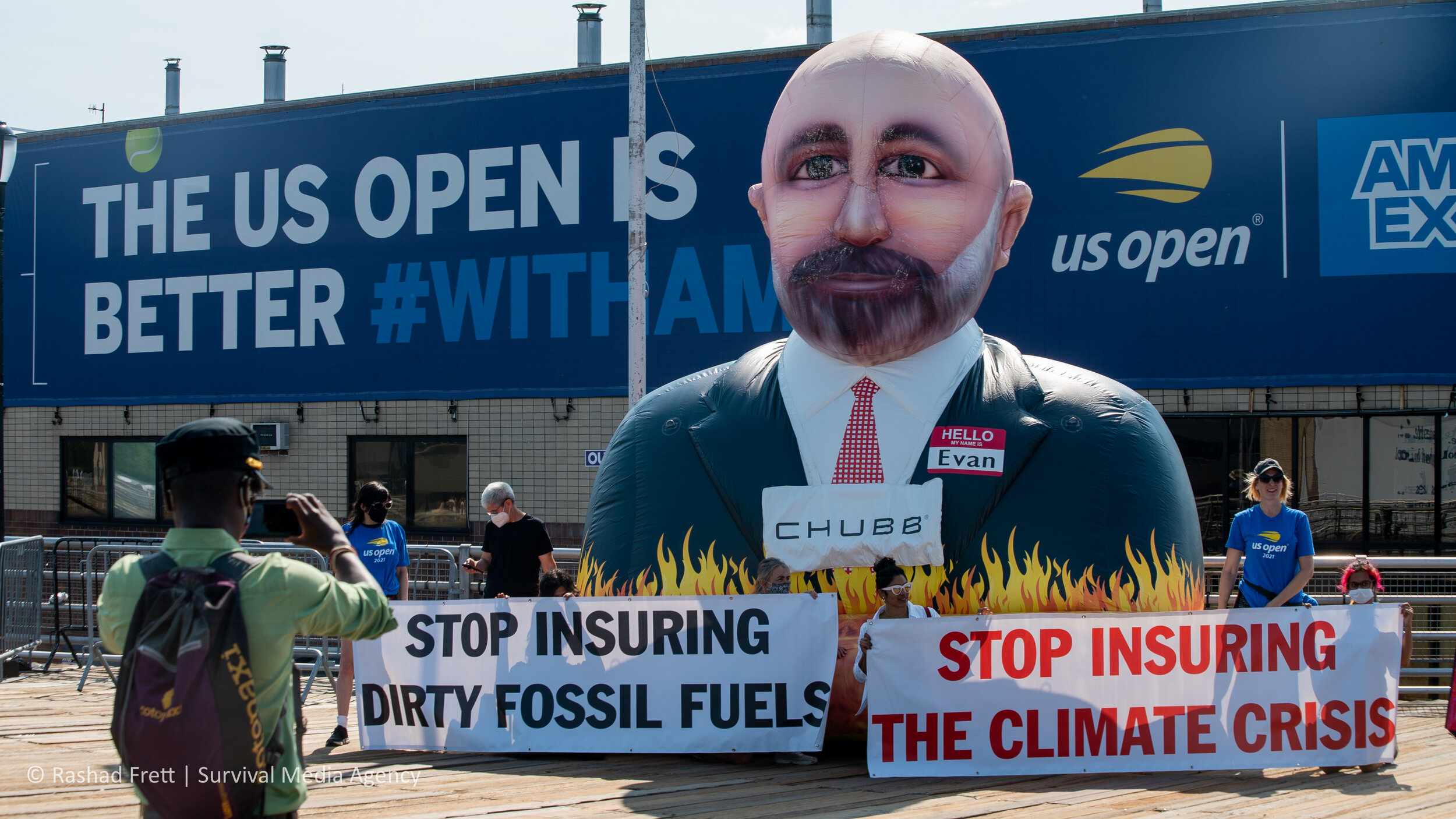